The bestie and I visited Feniland.
It was our #10yearchallenge.
‘It was long due’ would be an understatement.

This time we were tired and determined to get our backsides to this forbidden place the world kept talking about. We asked a few enthused friends who we thought might accompany us. Some left messages unanswered and some were out of the country.

The bestie, who I’ve chosen to call JoJo for this post, had had enough. She exclaimed, “I’ll go alone this time if that’s what it takes! And you’re coming” (That’s what “alone” meant to her. She and I).
We packed our bags and left. The husbands asked us if we were carrying our pepper sprays, and guns, and ammunition (yes, because that’s what two women traveling by themselves need these days). Our flight was delayed (Off late, I’ve been traveling by delayed flights only). Those traveling to Feniland were a gang of 20-something boys, some really fit foreigners, and newly-weds.

The 20-something-gang of boys were getting really impatient. They were already dressed for the beach, but the plane wouldn’t take them.
What a pity!

These boys had, by now, surrounded a lanky, helpless-looking airline crew. He looked scared because he had to make an announcement. JoJo and I were positive he’d be beaten up if the flight was cancelled. We were muttering “Fight! Fight!” under our breath.

There were no punches exchanged.
Mr. 20-Something left, disgusted.

I decided to walk up to him and ask him if he had any inside information.
“Please don’t call him Sir or Bhaiya”, JoJo insisted.

I stuck to “Excuse me”.
“Do you know what seems to be the problem?” I asked.
This was his reply, “They’re saying the window of the plane has broken, the technicians have pasted a new window, they’re waiting for it to dry up. The technical team is going to approve it, only then we can board.”
I kept a straight face while JoJo stood right behind him, giggling in my face. For some reason, I kept wondering what glue they were using and what if this window flew open once we were up in the air.

The airline offered us refreshments, which was not refreshing at all.
We finally boarded the flight and Mr. 20-Something was seen hooting.

It was easy-breezy once we reached our destination. The hotel reception asked us if we’d require bikes on rent. We declined. We’d rather have a car (we were rich in our heads and neither of us could ride a two wheeler).
A frail, old man named Rajesh drove us around. “Mujhe sab Rock bolte hai”, he casually mentioned (He wasn’t even remotely close to either the wrestler/actor or rock in general).
We stuck to calling him Rajesh ji.

Rock took us everywhere.
He took us to the flea where we picked up spices and jewelry. JoJo cooked fairly well so it made sense for her to be picking spices. I got them because they smelt exotic (the lady tried to sell me saffron from Kashmir; a major eye-roll moment there).
Rock insisted we go to the wholesale feni shop (clearly we looked like we needed gallons of it), and the cashew place, and the seafood place. We willingly obliged and didn’t regret one bit.

Feniland held up to its hype. It was beautiful, fun, and everything else they said about it. We didn’t have a schedule in mind so we planned our day as we loafed around the beaches in our two-piece and stuffed ourselves with Bira and prawn wafer, some more Bira, fresh crabs, and surprising concoctions of various kinds of poison.

Our little vacation was almost over. We were ready to get back to our lives as we said our goodbyes and exchanged our boarding passes.
After all, she is my happy place and I her’s. 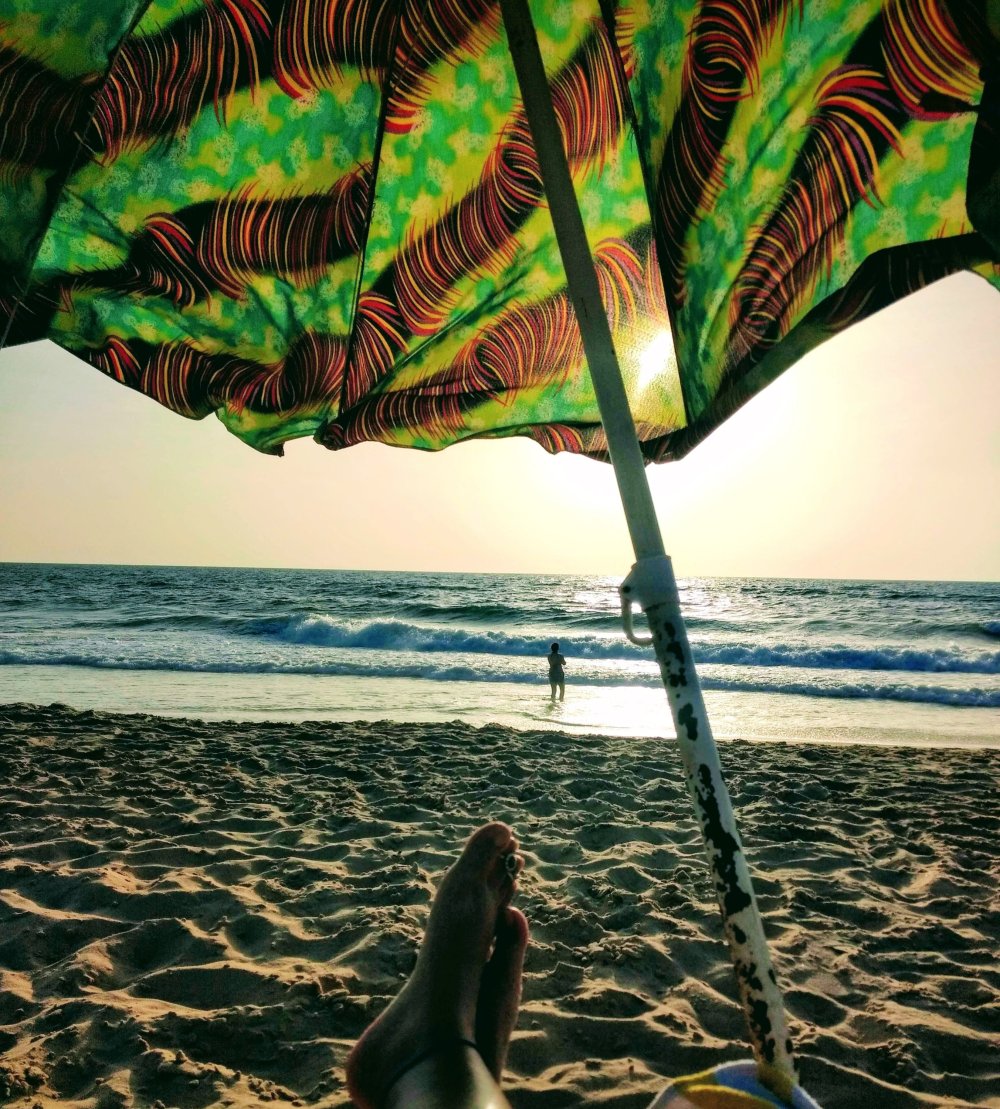 We are all storytellers; some say it as is and some narrate it with a pinch of salt. It's fascinating to observe everyday life and weave little somethings out of it. Mine is one such story nurtured with love, laughter, little bit of spice, and lots of exaggeration. View all posts by ofyesterdayswine

This site uses Akismet to reduce spam. Learn how your comment data is processed.